Noblesse is a manhwa from South Korea written by Son Jeho and illustrated by Lee Kwangsu. Noblesse tells the story of Cadis Etrama Di Raizel (also known as Rai), a strong noble who has been sleeping for 820 years, unaware of mankind’s progress and technological achievements.

I have ranked the top 10 strongest characters in the series.

She is a noble and one of Lukedonia’s current clan heads. She wields Blood Witch, a weapon that allows her to fire lethal energy beams. She also boasts exceptional teleportation abilities.

Divine Judgement is her most lethal attack, consisting of a magic circle that, when activated, unleashes her wrath on the opponent. This attack takes a long time and a lot of energy, so she can’t build another magic circle right once.

Doctor Crombell considered him to be one of the Union’s first failed experiments, and he was dumped. Later on, though, he develops the abilities of a werewolf. When Raizel awakens him, he discovers the true nature of his power.

At first, he could only alter his hand. But, thanks to Frankenstein’s direction, he was able to release his true werewolf form. He possesses great physical strength and explosive regenerative abilities, just like the werewolves.

She is the current ruler of the Loyard Clan and a noble. She is unconcerned with her surroundings, yet she is devoted to noble values. The origins of the Grim Reaper in human folklore can be traced back to this tribe.

Seira holds the soul weapon Death Scythe, also known as the Grim Reaper’s Death Scythe, which is a very strong weapon. She uses this scythe to deliver lethal attacks that can slash through virtually anything in a heartbeat.

Kei Ru is a Noble and one of Lukedonia’s eight current clan leaders. He is the Ru clan’s leader. Both nobility and werewolves see him as the most powerful of the current clan leaders. His power is so immense that all werewolves recognize it and become enthralled at the idea of facing him. He easily defeated Drakon, a powerful werewolf warrior, and was able to fight on the same level as Zaiga, one of the most powerful werewolves who fought Muzaka for the title of Lord.

Zaiga claims that none of the current werewolf warriors could have a chance against him and that if Kei had more time, he would have defeated him. ‘Garant,’ a pair of red hefty gauntlets, is his soul weapon. His soul weapon would turn red hot and ablaze when imbued with his aura. His physical power would rise, and he would become a true warrior, disregarding his Aristocracy. His hulk legacy is evidenced by the large scar on his face and marks all over his body.

Rajak’s power grew as a result of his training with Frankenstein; at one point, the royal guards mentioned Rajak as clearly surpassing his predecessor. Rajak has superhuman speed and is a master of stealth. He could evade unexpected strikes and even dodge laser beams at point-blank range.

He is a noble who treats modified humans as trash and does not, subscribe to nobility’s principles. However, he is, like his brother Rajak, a staunch supporter of the current Lord Raskeria. Following the death of his brother, he takes over as Kertai Clan Leader. He started out with an unfinished soul weapon called Grandine, which he was able to complete after his brother fell into everlasting sleep and awoke with new skills. He is an expert at stealth, which is a Kertai Clan trait. He has incredible agility and speed, and he can totally blend in with his surroundings before launching an assault on his opponent.

He is Raizel’s dedicated servant, he has served him faithfully for over 820 years. He is a talented scientist whose lost research notes contributed to the advancement of the Union’s scientific knowledge and technology in the series. He is now known as “Number 0” and is the newest member of the RK-5. Frankenstein is the most powerful human in the entire series, outperforming all clan chiefs, the current Lord, all Werewolves, and all Union elders.

He possesses a mysterious ability known as the ‘Dark Spear,’ which may also be used as a soul weapon in battle. It took him hundreds of years to discover it, and more than 500 years for the next human, Dr. Cromwell, to even become compatible with it. After transforming into a horrific black form and receiving permission from his master, Raizel, Frankenstein’s personality is what makes him the sole bearer of the Dark Spear.

He has the most foreboding and black aura ever, and he can channel it into a variety of weapons. He also has the ability to create dark tentacles, spears, dark projectiles, and a dark shield. He got a new weapon on his other hand after forming a blood contract with Raizel, called the ‘Blood spear.’

She is currently the Nobles’ Lord. She has the most power because she is just under “The Noblesse,” who does not intervene much even among the Nobles. Raskreia wields enormous power as Lord of the Nobles. The disloyal clan chiefs believe she is weak, a falsehood they spread to the Union, which was proven false by the observations of the 3rd and 5th elders.

Raskreia activates her latent strength after discovering Rajak has gone into eternal sleep when Drakon, Kaiyo, Mount, and Edian try to attack her. As the strongest Soul Weapon, her soul weapon is ‘Ragnarok,’ a double-edged sword with great destruction potential. the former Lord’s soul was split in two, there were two Ragnaroks.

Her abilities surged after she reclaimed the other Ragnarok, and she easily controlled a slew of traitorous commanders and royal guards. She has the ability to make swords rain down from the skies on her foes. She can generate a blood field like Raizel and demonstrate incredible talents when she uses her soul weapon. Her aura could shake the entire Noble palace, and she has telepathy and mind-reading abilities.

Muzaka is the former Lord of the Werewolves and Cadis Etrama Di Raizel’s only equal companion. He has been restored as lord by the end of the series. He is revealed to be the one who put Raizel into his 820-year hibernation. Muzaka’s sole daughter was killed by humans 800 years ago.

Muzaka became enraged and set out to eliminate mankind from the face of the world as a form of vengeance. Muzaka’s only ally, the Noblesse, had no choice but to use all of his might to stop him. He succeeded, but it put Raizel to sleep for over 800 years.

Muzaka has the most powerful change of all, becoming the strongest Werewolf ever after growing fur and claws. His age and experience make him the most powerful of the nobles. He possesses the rare talent of sonic howl, which has devastated the majority of his opponents right at the start of a fight.

He is the main character of the Noblesse series. He is a Noble from Lukedonia who holds the Noblesse title, which differentiates him from all other Nobles as their concealed guardian, judge, and executioner if required. He is without a doubt the series’ most strong character. He has authority over every creature on the planet, even blood.

He has the ability to manipulate blood as well as read minds, telepathy, and mind control. He can stop them in their tracks no matter who it is or what they are doing. Because he is an overpowered character, he has yet to recover from his encounter with Muzaka. He now has a limit to his abilities as a result of the battle, and if he uses too much strength to save his comrades, he pays a high price.

That is why Frankenstein does everything he can to avoid his master having to intervene. He possesses the highest level of aura manipulation, as he can create force shields not only for himself but also for fallen allies. While he uses too much force, such as when fighting Muzaka, Marude, and Lagus, he gets amazing long redwings. Overusing his power causes him to shed bloody tears, but his honor as the Noblesse commands him to save everyone, even if it means sacrificing himself. 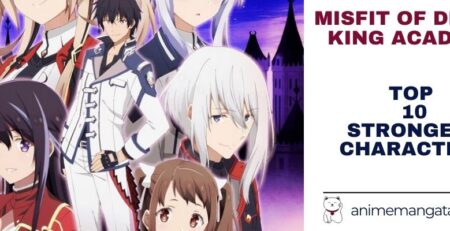 The story follows the Former Demon King Anos Voldigoad who is reincarnated 2000 years after his passing and goes to a school with his descendants. Here is the list of the top 10 strongest characters in Misfit Of The Demon King Academy. 10. Eleonore Bianca Eleonore was introduced... Read More Ranking characters in Kingdom is a bit tricky since intelligence also plays a huge part in General's strength. Some generals are great in physical strength, while some in tactics and others have skills in both. I will try to rank the characters in all three... Read More